THE NATURE OF SHADOW

The exhibition “The Nature of Shadow” presents a series of images of flowers and insects printed on Japanese paper by the artist Andrea Martiradonna. An architect by training and architectural photographer by profession, he has developed through years of experimental work a unique way of printing images of plants, seeds, and insects on paper. Using a distinctive photographic device, the scanner, he produces direct visions, in which the structure of the subject emerges from the darkness of the environment, much like X-rays.

The choice of printing on rice paper conveys a sort of fragile materiality reminiscent of the transitory nature of flowers.

The combination of techniques used means that the viewer does not focus so much on the object under observation as on the substrate of shadows that comprises it. The choice of neutralising the colour and limiting the light is made with the intention of highlighting the true object of the works, which are the thousands of different tones of shadow that lie hidden in the folds.

Andrea Martiradonna was born in Milan in 1965, and graduated from the Polytechnic University of Milan with a thesis on the storage and electronic processing of architectural images.

Towards the end of university, he began to collaborate with Italo Lupi’s magazine Abitare, and he considers this period the true classroom of his life. In the meantime, he worked as a camera assistant for several film production companies and for RAI (Radiotelevisione Italiana, the national public broadcasting system of Italy). Since the 1990s, his work as a photographer has been expressed in collaboration with various architectural studios and design companies.

In 2006, after years of architectural photography, he began to turn his lens to seeds, plants, and flowers and this led to the creation of the series of images exhibited at Sunlightzipper in 2014 and by Antonia Jannone in 2016. His work is sold in Milan by the Jannone Gallery and in Chicago by the Thomas Masters Gallery. 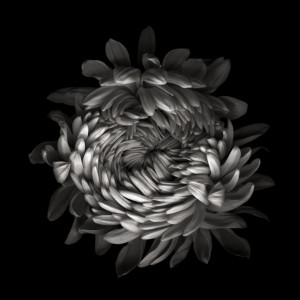